Flat Stanley Gets Mailed to Seattle 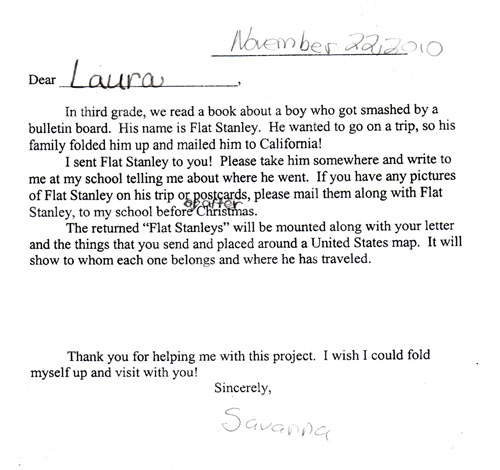 I have a thing with deadlines and rules – if you give one to me, I will make it flex.

Flex? Who refers to missing negotiating deadlines as “flexing”?

Even when I give them to myself, they are always up for negotiation. Take for instance a little letter than landed on my doorstep just before Thanksgiving. Inside it was a form letter filled out by a sweet, sweet little girl who lives in Iowa and I happen to be related to. The letter is as follows:

Schweet! Right away I knew exactly where I was going to take Flat Stanley and what we were going to do. I was going to give my cousin the best Flat Stanley experience, ever! Hands down—THE BEST! And mail him back before or after Christmas? No problem. Lots. Of. Time.

Flat Stanley and I ventured around the city on Sunday, January 2nd—after Christmas. We hit all of the hot spots in Seattle and were even going to go see the Fish Guys at Pike Place Market and sweet talk them into a picture, but we couldn’t find parking. That’s okay; it was January in Seattle and Stanley was cold anyway (my aunt told me I could color him after we started on this journey; that would have been good to know).

So we went home after stopping for a fresh cup of good ol’ Seattle coffee, dumped the SD card of images, and promptly forgot to print them out.

That’s when I got the nice little ping for my aunt on Facebook a few weeks later, wondering what happened to their sweet Flat Stanley.

Shit. My nine-year-old-cousin choose me to send Flat Stanley to and all of the good intentions in the world were preventing me from printing out those pictures and sending him back.

Okay, let’s cut myself a little slack here. That and the fact that I don’t have a sweet, top-of-the-line color photo printer. Oh, conveniences! If they just asked me to post an album on Facebook, I would have done it, no problem! Better yet…live Tweet our adventure!

Wait, these are third graders…

So I sent my photos off to a printer, found a card, discovered a unique way to tell our story, and finally gave Stanely that sweater he was shivering over. If he was going back to Iowa after a big adventure in Seattle, the least he could have was a souvenir.

And on the first week of February, after Christmas, I mailed Flat Stanley back to my cousin in Iowa.

The moral of the story is…

And last week, I received this message from my aunt on Facebook: 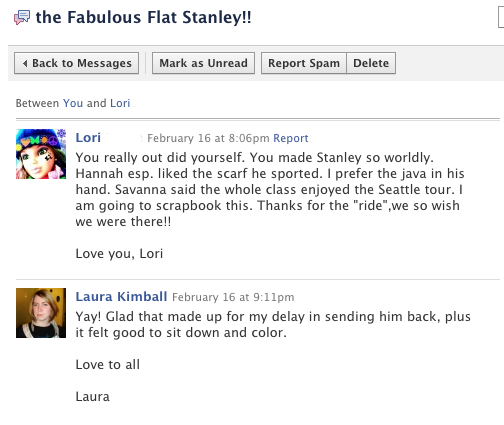 If you have to stretch a deadline, it better be worth it.

Do you have a Flat Stanley story?