Am I really a writer? 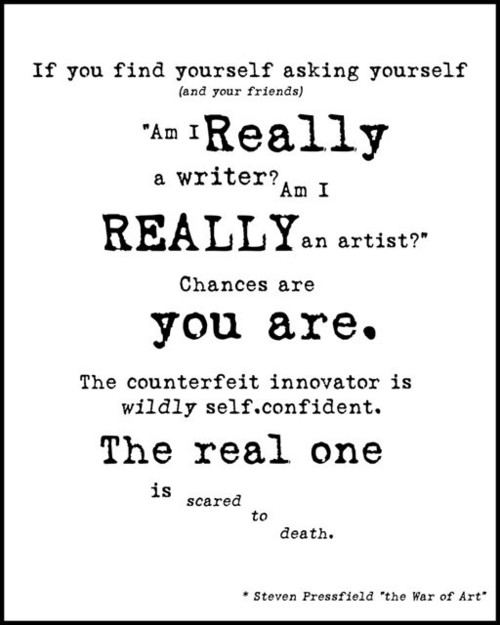 My husband shared this picture with me today and it speaks to me too much not to be shared.

This is something that he and I have been struggling with for our entire lives but only embraced last year (it was the secret I was talking about in this post actually). The challenge for me is declaring and ‘owning’ that I am, indeed, a writer. For John, it’s that he is an artist.

The difference between a writer and an author

As someone with a background in the book publishing industry, I hold the titles of “writer” and “author” to high regards. Just because you write does not make you a writer.

Next time someone you meet at a party introduces themselves as a writer, ask them what they’ve written. If they say, “Oh, nothing you’ve ever read,” then they’re not really a writer.

Last spring I had a conversation with Simon Salt about this topic and he pointed me to a very good blog post he wrote on the topic: Author, Writer, Blogger – it’s all the same write?

Here’s how I define it:

To be an author, you need to write something that is published by someone who is not yourself. This means your writing is in a book, a journal, or in a magazine (though periodicals usually mean you’re a journalist) and it was edited and endorsed by someone else, usually your editor and the publisher. Again, not you.

To be a writer, you should have some level of formal training and be paid or endorsed by someone to write. In other words, the transaction of a payment means that someone else has endorsed that you truly are a writer. Can you be a ‘writer’ if you’ve never been paid? Sure, just like I’m an athlete though I’ve never competed in a competition but I’m not going to carry around business cards that declare that.

Is that fair? No, not really. So that means you better self-promote the hell out of your work if you want them to notice your writing and call you a writer. 🙂

Am I really a writer?

I have been writing since I was seven years old, since before I knew what a paragraph was. In spiral bound notebooks, using colored felt-tipped pens at recess. I did not play kickball or foursquare, I wrote. Harriet-the-Spy-style, but instead of writing down what I was seeing, I wrote stories. And I kept them to myself because I was not brave enough to share them with other people.

It wasn’t until I read blogs like Damsels in Success (which is no more), Penelope Trunk’s Blog, and a year later Matt Chevy’s Life Without Pants that I decided I, too, had shit to say and was brave enough to say it.

And it wasn’t until the evening after publishing my first blog post after seeing the positive response on Twitter and reading my first comments in my friend’s kitchen that it hit me – people wanted to read what I had to say.

I almost threw up.

About ten months later I got my first job as a paid writer based on the writing my client found on my blog. She was the first person to call me a “writer” and it wasn’t until December that I started adopting that title to my friends.

Malcom Gladwell says it takes 10,000 hours or approximately 10 years to become an “expert” at something. While I still have a lot to learn and every thing I write is hard to produce, it’s safe to say I’ve crossed that mark.

Am I really a writer? I have no idea. But I know what I’m doing.

And, yes, I’m scared to death that people will find out that this is exactly who I want to be.