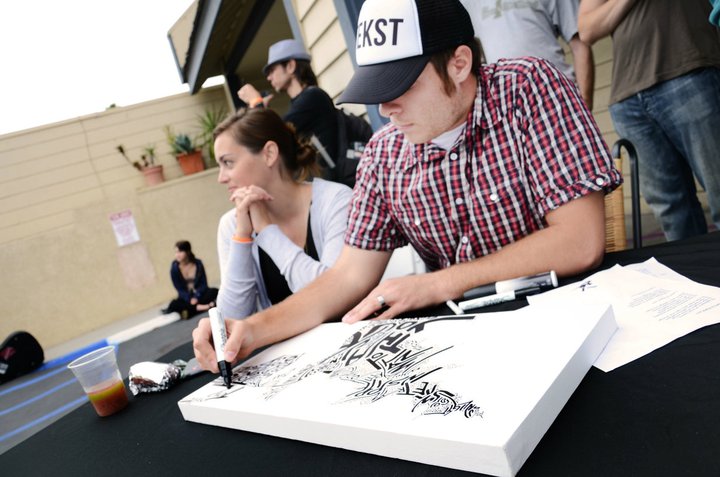 I’m psyched. Why? Because I just spent the last fifteen minutes consuming a website that just launched.

It’s no secret that I have a love of words and language. And we all know that a picture says a thousand words. But what happens when the two marry and words create an image?

TEKST is a 366-day experiment where each piece is a one-of-a-kind create made up completely of words.

He creates each piece by doing what you and I do every day on our blogs, on Twitter, Facebook, and even the archaic action of ‘forwarding’ an email – by “remixing” ideas. In TEKST’s words:

This “remixing” of ideas can even be seen in each and every art piece. I use quotes, audio tracks, even imagery originally created by others. I have gone to great lengths to credit each source along the way. I believe that every facet of each piece has been created under what would be considered “fair use”. At no point was/is it my intention to outright steal content that doesn’t belong to me. I will happily add/adjust proper credit that is found to be incorrect or missing.

Want to know the best part? He’s selling each TEKST art project for the price of the day of the calendar – that’s $1 on January 1, $2 on January 2, $3 on January 3, etc. with original text-inspired artwork that he’s already created for the first half of the year and artwork commissioned by you the second half of the year.

Why I dig TEKST

TEKST Artist is a dear friend of mine. When we met last March, this project was an idea and didn’t even have a name yet. I love how it’s evolved over the past year and I admire TEKST’s decision to launch this project and invest everything he has into it:

Leaving a steady job to “shoot for the moon” and pursue a career as an artist (especially after almost a decade away from the craft) is something else entirely.  I decided there was only 1 way to get up to speed- I’m going to make and sell art for 365 days straight in 2012, create a video for each one, and feature it right here on the homepage.

But as with most successful people, he didn’t do it alone. Art Alternatives sponsored every single one of his canvases and made the 366-TEKSTs possible. He also has an amazing wife, mentors, and friends. We’re all bought into this project when it was still an idea. And now that it’s launched, we’re all glad we did.

Time to get your TEKST on

Seriously, go check out the calendar. January 1 to June 15 are pieces of artwork that he already created. And starting June 16, you can commission TEKST to create your own piece for $168 – which is a pretty amazing price for a commissioned art piece!

Go, before the entire calendar has been purchased.

You can purchase the classic Macintosh piece that was created in the video linked above on June 15 or a modern “Fail Whale” ala Twitter on May 19.

I just chose and purchased my TEKSTs, have you?