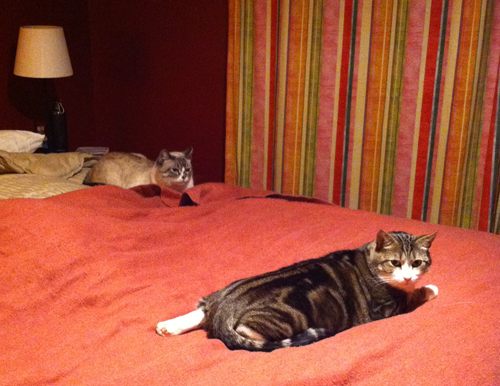 I am in the middle of the battlefield trying to write my third-to-last blog post for National Blog Posting Month and I am dangerously close to turning this blog into a diary.

And Minnie, the cat on my desk, just chased Vito, the cat who is not on my desk. She has chased him because he is in her space – the space formerly known of as my office.

I guess I should be thrilled by this attack. Not because she attacked the Vito but because she’s sick. In case you were wondering, the worst way to start off a post-holiday week is in the veterinary’s office; the same office that put down the first cat that you and your husband and you owned together in your adult life nine months prior. And you’re there, alone, with your new kitty who just this last weekend you convinced your husband that you would like to keep.

Minnie’s an Alpha. She came to us after being abandoned by her previous owners who moved out and literally left her in the house, telling no one. Her human grandma found her. And John found Minnie through a friend-of-a-friend’s Facebook. He saw per big blue eyes and her Siamese mix face and he fell in love.

We didn’t even ask if she got along with other cats before we made the appointment to meet her. That’s when I knew that as soon as we saw her, she’d be ours.

Old Man, may he rest in peace, passed away in April. We still haven’t opened his box of ashes that are sitting on my shelf, three feet from this computer.

Losing a pet opens a wound that never closes.

Old Man left behind a brother, Vito, named after the Godfather but has the personality closer to a teddy bear, likes to cuddle. He’s not an Alpha, though after bringing Minnie into the house, I keep hoping that he will be. As I said, he’s a teddy bear. Non-territorial, likes to show you his belly, and has the largest big green eyes of innocence that I’ve ever seen.

And then there’s Minnie, who was five-and-a-half pounds of fury when we adopted her in June and I’m so Goddamned proud that she’s up to eight-and-a-half pounds today. Cats come to our house to get fattened up.

And Minnie is eating again while Vito watches her from a chair. Which means she has her appetite back. Which means we’ve made progress if she doesn’t get sick overnight.

Tomorrow the vet will call me with results from her blood work. If anything comes back positive, that means that something is really wrong. If it comes back negative than that means that we don’t know why she is sick, but just was.

As soon as Minnie decides she’s finished with her bland, wet food, Vito jumps in to lick her bowl clean, like every good brother should.

Why do we always need to search for the ‘why’?