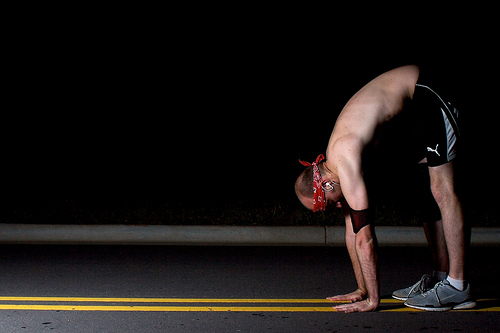 There are two kinds of end of the year/New Year blog posts to write. The first is a reflection of the previous year – everything you did, everything you didn’t, what you’re proud of, and what you’re not. And the second is a laundry list of “do’s” and “don’ts” for how to make the next year rock much harder than the last.

And then there’s a third, which doesn’t reveal anything about the writer but gives you, the reader, a map of how you can stick to your resolutions for the first time ever.

New Year’s Resolutions are like plans – you write them for how you’re feeling (usually fat) at that time (post-holidays) for the future (that has yet to be written) – and they never work out. They look great on paper, but horrible in execution because they all lack one thing – foresight and the understanding that you have to sacrifice something to accomplish what you need (and the ability to adjust to continue the momentum).

Instead of resolutions or plans, I make goals. I did this unknowingly as I entered 2010 and consciously as I entered 2011. I met the three goals I set in 2010 but not all of the goals I set for myself in 2011. While all of this past year’s goals looked great in December 2010, by mid-2011, an imbalance between work and life happened and parts of those goals were prioritized while others were not. Plus I set too many goals.

I don’t feel like 2011 was a failure, but just plain weird. In the Christmas letter John and I sent to our family, I summarized the year as one of “change,” and by God, if that isn’t true.

2011 started with a lot of oomph, passion, and excitement as things were set in place that I had been working hard towards achieving in the previous year and a half. But I got burnt out early, outgrew that opportunity faster than I imagined, and a new opportunity revealed itself and I jumped on it. If 2011 was a shape it would look like a giant “U” with a big, deep dip in the middle.

A New Template for Plotting World Domination in 2012

Earlier this week, my husband and I spent the evening working through Benny Hsu of Get Busy Living’s 2011 Year in Review Worksheet. What I like about his template is it focuses on how the previous year ended so you can reflect on what you’re proud of, what you accomplished, what you learned, what didn’t work, and where you’d like to see yourself in the future.

Benny’s worksheet helps you see where you want to go by reviewing where you came. It’s similar to racing a car – they say that you should look at where you want the car to go, not at the wall that you don’t want to run into.

Goals, plans, and strategies are the same way – look at where you want to go, not where you don’t want to go.

2011 was the U-shaped Year of Imbalance, Burnout & Change

And because I am who I am, there are many times where I bent the template and added a few extra items.

10 greatest things that happened in the past year:

I am most proud of these three accomplishments last year:

Three great lessons I learned from last year are:

Listen to my gut, because:

Three personal developments I have made in the past year are:

If I could do things again last year, I would do these three things differently:

Three things I need to do less of next year are:

Three things I need to do more of in the next year are:

Three things I need to stop doing completely next year are:

Three reasons I didn’t achieve my goals in the past year are:

Three goals I want to achieve next year are:

Three reasons why I want to achieve these goals are:

Smartest decision I made last year:

I quit my last job.

I accepted a new job and a new startup.

One sentence that sums up this past year:

2011 was harder than it should have been.

One year from right now, I want my ideal day to look like this:

Wake up with John and have a home-cooked breakfast (meaning not eating on the bus or on-the-go). Head to the park and ride and take the bus downtown. The first half of my day will be dedicated to writing, blogging, working on the movement or other marketing projects for the Scrappy Face brand. I will never eat alone. Afternoon will be dedicated to client work. After work, I’ll head to CrossFit then head home to have dinner with John at the table and not in front of the TV. After dinner I’ll write for an hour or two before heading to bed.

The weekends will be mine. I will not work on the weekends but play. Sundays I’ll write.

2012 is the Year of Kicking Ass, Writing & Building Strength

And there you have it, my year in review. That last question was so hard for me to write because it asked me to look so far into the future (a year, I know!) and imagine what might be. Up until that question, this template was my best friend.

2011 had a few themes: work, burnout, and battling an injury. 2012 will have three themes as well: kicking ass at my current job (I am helping build this company and studying for how I will build my own), writing, and getting stronger at CrossFit.

There will be awesome details that will create an amazing rollercoaster across the year, but those three things are what I’m focusing on: my work, my passion, and my body.

Two questions for you:

Thank you, Benny Hsu, for this awesome worksheet, and Alexander the Great for introducing me to it.