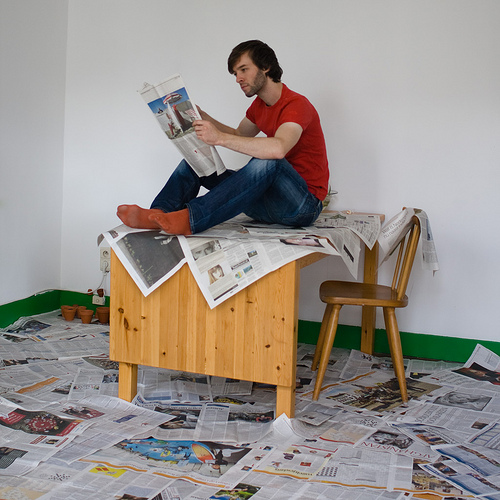 It takes thirty days to form a habit and three days to break it. In other words, life happened, so get over it.

And even though my week was sans blogging, it doesn’t mean that others were not. So here you are four articles of substance and two that are (mostly) just for laughs.

Read this because: You grew up watching Disney movies and devouring teen magazines to tell you that you were normal and not a unique freak.

Spoiler alert: It’s okay. But Ms. Schwenkler is here to help you unlearn all that (and still appreciate the beauty within the beast).

Courage isn’t always glamorous. Actually, it almost never is. by Jenny Blake on Life After College

Read this because: You live in a world where you are required to embrace what you’re passionate about, give your finger to ‘the man,’ and make your dreams real. You are supposed to push your own envelope, do one thing every day that scares the shit out of you, and come out on the other side smiling. Right?

And Ms. Jenny is here to set the record straight: “Courage is earned . . . through tears, fears, heartbreak, and failure. It’s messy. Ugly. Rocky. And you find your courage when you have no choice BUT to trust it.”

Bonus: Jenny’s blog is jam-packed with advice on how to keep the post-college journey on the right track. And the best part? This advice comes from a person who’s in the thick-of-it herself.

Millennials are Born Entrepreneurs. Wait, Really? Commentators are claiming that Gen Y-ers and Millennials are start-up naturals, and great salespeople. Or are they just victims of circumstance? by Jessica Stillman on Inc.com

Read this because: The hipster entrepreneur conversation keeps going and each writer is going one step further. Instead of exploring what they are and if they are entrepreneurs or not, this article is starting the obvious – what if there isn’t anything special about millennials, but they’re just victims of a shitty economy and the end of the traditional job market that our baby boomer parents knew and thrived in?

My question to the writer: Aren’t all generations victims of the circumstances that are happening around them?

Read this because: You’re an open or a closet connector who gets giddy when you get the opportunity to introduce one person to another. Bonus if the two had no idea the other existed or why they needed to know each other (but thank you profusely for the connection after).

May the 90s Rest in Peace and White Girls on Facebook

Read this because: You grew up in the 90s and you forgot about the Tamagotchi, Topanga, and how much you “wanna really really really wanna zig a zig ahh.”

Now slam your body down and rub it all around.

Read this because: It went “viral,” is hilarious, and no, I won’t admit to which items I enjoy doing.

Warning: Mary’s a firecracker, and her rants about life may turn into your new guilty pleasure.