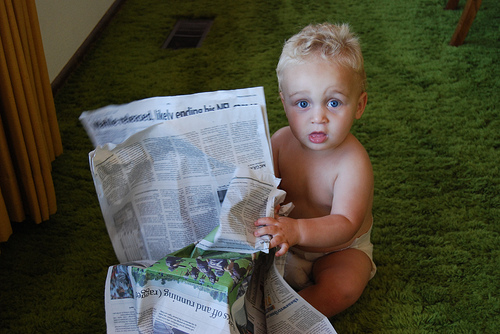 Sunday Serial is a semi-regularly weekly installment of the best articles written and read around the Internet during the past week or so. I try to introduce each article so you know what you’re getting in to before you click, though sometimes my synthesis goes a little bit deep. You can read previous Sunday Serials here.

Read this because: I’m a fan of brevity, and you should be too. As George Orwell said, never use a ten-dollar word when a five-dollar one will do. Whether that’s in every day speech or in your writing.

What I Learned From Quitting My Job…Twice. by Amber Nashlund on Brass Tack Thinking

Read this because: You’re on a path few have traveled. You are ready to shake things up, you’re ready to say “I quit,” but uncertainty is holding you back. Here are some great lessons to move you away from “un” and closer to “certain.”

I hereby (fictionally) resign by Reginald Braithwaite on raganwald’s posterous

Read this because: Last month, recruiters and hiring managers starting asking candidates for their passwords to their personal Facebook accounts. Why? So they could do a more thorough background check on the candidate’s personal life.

Then Facebook came out and publicly stated that asking candidates to give out their passwords is an invasion of the candidate’s privacy and that of their friends. And last week, the state of Maryland became the first state to ban employers from asking for Facebook passwords.

Don’t HR managers know to keep their hands off of our personal Facebook pages?

If you’re reading this, mouth agape, wondering “WTF?” read the above post. While a fictionalized account, it’s a good story about “what if.”

Bonus: Here’s what you should do (in the real world) if your employer or hiring manager does ask for your password.

Read this because: It’s no secret that I come from the book publishing world, so the advent of blogs, eBooks, online publishing, etc., anyone can be “published” and the assets that the old book publishing world used to bring to the table are no longer valuable. Digitization has killed this industry and turned it into a button. And I’m left wondering, would it have been better to be outsourced to China or replaced by a machine than a button?

But there’s hope – yes, the industry is dead. The mystery, allure, and “secret sauce” of what makes a best seller still exist, but the tools for production and sales channels are accessible to all. It’s not so much that publishing needs to disappear, but pivot. Instead of being the “process of distribution,” become the services that authors need – editorial, marketing, access to readers, and design.

Texts from Hillary on Tumblr

Read this because: It’s not every week that a meme is started and the subject of the meme, memes herself. As the final post says, “It turns out that memes really do come true,”