Sunday Serial: Seven Links for the Entrepreneur in Training 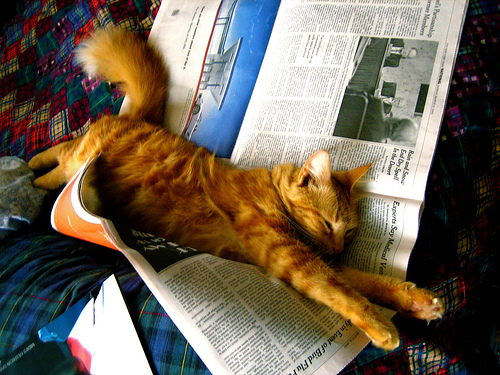 It’s Sunday and you know what that means — it’s time for your weekly reading list curated by me! Woo!

The Sunday Serial is a list of the best articles I encountered and read during the previous week. Sometimes they have a theme, but most times they do not. This week, it’s all about startups, becoming an entrepreneur and one thing that we all need, a little humor. Enjoy! And since the world revolves around reciprocation, leave me a link to the best thing you read last week down in the comments. Seriously 🙂

Links for the Entrepreneur in Training

Read this because: You’re attracted to startups, addicted to the culture of innovation, and addicted to doing something that no one has done before. And while you help build out other people’s ideas, you’re waiting on the sidelines, anxiously, for your own idea. Or you’re startup-curious and can’t wait to trade that 9-to-5 lifestyle of clocking in and checking out for something that will be much more exciting, you’re sure of it.

But are you? This is a great article with questions to ask yourself when it comes to figuring out if the startup lifestyle is really for you.

Brian Clark, who’s most famously known for his Copyblogger empire, does not answer that question, but he does explore an opportunity that all entrepreneurs can take advantage of no matter what their product is, and that’s becoming a content producer.

Content drives everything. It’s marketing, a channel to your audience (customers), and gives you an unfair advantage over your competitors if you do it right and keep your audience first. This article is pure gold and worth reading.

Read this because: Lessons that we learn in sports can be applied to business, and this is a good one.

Disillusionment of an Entrepreneur by Prerna Gupta TechCrunch

Read this because: First-time entrepreneurs believe that as they start to build their first startup and work towards making it real, someday they will sell it for millions of dollars and then get to retire. But as Prerna Gupta describes, as soon as she reached what she thought was her end goal, she came up with another one and kept working.

I don’t have my own business yet, but I’ve helped build three businesses and I’m on my fourth. Working every day with entrepreneurs is exciting, and knowing that what I’m working on will directly impact the business makes the long hours and the ambitious goals worth it. But at the end of the day, there’s always more to do. Good to know that I’m not alone in feeling like I’m never satisfied or “done” when it comes to work.

Read this because: Crowdsourcing has become a viable way for entrepreneurs to fund their projects thanks to websites like Kickstarter. It’s been three years and almost 50,000 projects since the site launched on April 28, 2009 and The New York Times put together this great visual about which categories of projects were funded and how much has been raised. It’s a fascinating diagram to study if you’re considering running a campaign on Kickstarter.

Links for the Entrepreneur Who Needs a Break

Read this because: I love Tumblr, and every week I find a new meme that rocks my world. This week I discovered #WelcomeToSeattle. It reminds me of #WhatShouldWeCallMe, but appeals to my Seattleite sensibilities.

24 Life Lessons, Courtesy Of My Cat by Georgia Perry on Thought Catalog

Read this because: You have a cat or know someone who does. And yes, this was definitely written by a cat owner.

What’s the best thing you read this week? Leave me a link in the comments.