Why do we like to point out other people’s mistakes? 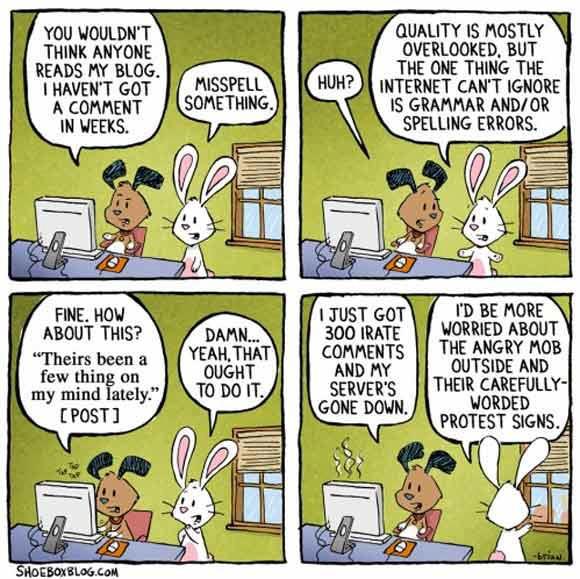 There’s a trend going around and it’s one that I’ve had the fortune and misfortune of being on both sides of the table. It’s the one that’s illustrated above and if you aren’t like those bunnies that did it intentionally, it can be embarrassing or infuriating when someone calls you out on it.

I’m talking about mistakes. Not the ones that you make quietly and no one but your inner critic notices, but BIG and little mistakes that everyone notices and brags loudly in a public forum.

And what really sucks about the state of the Internet is when we see things as small as a misspelled word or as large as an inappropriately timed tweet, we’re are so ready to jump out and publicly declare it to be a fail.

There are two sides to this story – the first is a grammatical mistake. Those are simple errors that anyone can make and can be solved with a simple, private email that points out the error in the same way as a good public servant would.

Editors are the biggest participants in calling out this kind of mistake. If they could live off of the errors they find in marketing collateral, they would.

An editor is motivated by one thing and that is saving and protecting the English language. Grammatical mistakes and misspellings are black and white. Those things have rules that should be kept and rules that should be broken. And if you see one happen, be a decent person and send an email or a private message to the person who made the error instead of calling them out publicly.

But then there are the larger missteps that are usually labeled as “social media fails.” These are the tweets, Facebook posts, and blog posts written by people who apparently don’t “get it” and the mistakes they make are at the expense of the brand they represent. The innocent fails like Red Cross getting slizzard or Discovery Channel’s long commute are usually powered by an overworked, multitasking social media manager who forgot which profile they were logged-in as.

Then there are the epic fails that are usually the result of a team executing a strategy that is restricted by corporate policies that came before the brand started playing in social media. And as a result, the repercussions from those kinds of fails can be detrimental to the brand.

Why do we like to point out other people’s mistakes?

Mistakes in social media happen very publicly, painfully, and usually before anyone can get the resources they need to handle it “correctly” before the crisis spreads like wildfire. I’d say that social media fails spread faster than social media successes.

I understand why editors have the desire and need to point out grammatical errors, but what about the rest of the population who are quick to call something a fail and label it as a mistake? What motivates them?

So I ask, why are people so quick to point out when someone is wrong?