Taking the HTC One mini on Tour in Europe 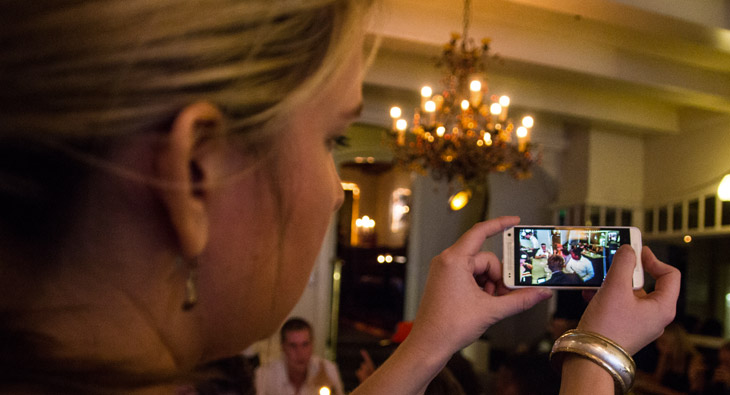 One of the highlights of my job is talking to our most passionate fans online every single day. So when I was given the opportunity to take the newest member of the HTC One family, the HTC One mini, out on the road and introduce it to some of our top fans in Europe, I only had one question: “When do I leave?”

The first stop on our trip was London and the Abbey Tavern. We entered the tavern and snuck through a tight hallway into the backroom where 40 HTC superfans from the London area, and few from as far as Ireland and Italy, were eager for their introduction to the HTC One mini.

As the night winded down a group of three musicians sitting at a table pulled out their instruments and started singing. This wasn’t an official show, just three friends hanging out at a bar and jamming. It was a great way to end our first night in Europe.

The next day I strapped the mini securely in my backpack and boarded the train to our next stop. While on the train admiring the English countryside, I couldn’t help feeling like I was in a Harry Potter movie.

The venue for that night was the Metropolitan, a grand Victorian hotel outside of the core of the city. The interior literally felt like a tavern house from the eighteenth century, with plush, overstuffed wingback chairs and leather couches surrounding large wood tables.

It felt very English and was a great backdrop for introducing the latest technology to some of HTC’s top fans. The excitement was evident. Several enthusiastic fans drove nearly four hours to join us.

And what did they think about the mini? Heidi Rawling probably said it best, “HTC One mini is the most beautiful phone in the world, if you’d held it you’d know!”

Off to the continent

It’s the phrase no one wants to hear at airport security: “Whose bag is this?”

“It’s mine.” Oh, right, I forgot to remove the dozen smartphones from my luggage as I was heading to Berlin. He grabbed the case filled with phones, unzipped it, and started counting. “What does a person need so many phones for?”

“Oooo, this one’s nice,” he said with a smile, pointing to the red HTC One.

In Berlin, we were at Café/Restaurant Neu, a trendy destination tucked off the beaten path. Fans drove hours to get there, some from far-away Romania. We started off with a champagne toast and introductions before handing the mini over to everyone to play with. Just as before, the fans in Berlin loved how the mini felt in their hand and loved taking Zoes.

The next morning I had a few hours free before heading off to the airport, so one of our fans, Alex, graciously gave me an impromptu tour of his city. Piling into his Peugeot, he took us everywhere: through the Tiergarten, past the Siegessäule, Brandenburg Gate, to Checkpoint Charlie and the Berlin Wall Memorial, and we even met Maxi, one of the two famous Berlin bears living in a park in the center of the city. Maxi was 27 years old and passed away last week.

Thank you, Paul, for showing me your city.

Amsterdam is a city of history, canals, bicycles, and tourists. With the narrow semi-circle streets that curve around canals that wrap around the center of the city, there’s barely room for one lane of traffic let alone a taxi, row of bicycles, and pedestrians, most of whom are tourists.

The final meet-up was held at Sluizer, a gorgeous restaurant in the center of the city that has a charm of old Amsterdam mixed with modern fare, and an ideal venue to unveil the mini once again. Fans swapped stories about their first HTC device, took Zoes, and compared the size of the mini with their current HTC.

As Jasper, an HTC fan from Delft, Netherlands, put it: “Brilliant how the HTC One Mini has all the power the HTC One has, in a more compact package.”

In each city, the HTC One mini won the hearts of our superfans. I still can’t believe that some traveled by train, others hours by car, and by airplane from the other side of Europe to join us and see the latest from HTC. Just as our phones work to bring friends and family together, I was thankful that HTC gave this opportunity to bring us and our fans together. I hope you see you at our next meet-up!