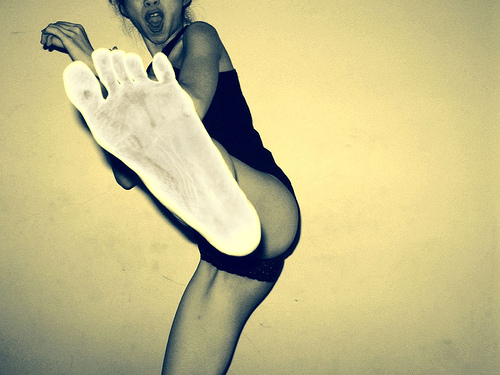 This post is part of the #Trust30 Challenge, a 30-day writing initiate inspired by Ralph Waldo Emerson’s “Self-Reliance” that encourages you to look within and trust yourself. To find out more about this challenge, read why I am (trying to) participate or details about the pledge.

What I must do is all that concerns me, not what the people think. This rule, equally arduous in actual and in intellectual life, may serve for the whole distinction between greatness and meanness. It is the harder, because you will always find those who think they know what is your duty better than you know I. – Ralph Waldo Emerson

I once received a fortune cookie that read: “Speak less of your plans, you’ll get more done.” What’s one project that you’ve been sitting on and thinking about but haven’t made progress on? What’s stopping you? What would happen if you actually went for it and did it?

On Sunday, June 19th, the prompt I wrote for the Trust30 challenge went live. This is actually a mantra that I have written about and repeat to myself on a daily basis – it is also the saying that is featured in the header of my blog.

Why I wrote this prompt

My intention for writing this prompt is I have encountered way too many people who talk about the things they are working on and are doing and don’t deliver anything. People who brag about powerful brainstorming sessions and how they’ve strategized something amazing and then—that’s it. That’s where the conversation ends.

I’m a fan of results. I’m a fan of action. I’m a true blue storyteller who means it when she says, “Show, don’t tell me,” and “Actions speak a hell of a lot louder than words.”

I really appreciate how Marek Lutz criticized my prompt by pointing out how contradictory it is (it was something I didn’t realize myself), but the point of this prompt is to take the ‘bull’ out of the shit that people brew every single day. Have you ever told someone that you were writing a book? Or working on a new company? Or had ‘the next great idea’ and are going to launch in the fall?

Or, worse, were you ever that person who ‘thought of that’? The person who thought about it so much that it didn’t go anywhere but someone else took it, ran with it, launched, sold it, and is not sitting on top of your millions?

That will never be me. I don’t have my ‘great idea’ yet, I just haven’t been that lucky. But I do have ideas for how I will make myself ‘great,’ but I keep them to myself or let them leak out to a careful select few because I want to be the person who launches that idea into an explosion. I want to take my friends and the world by storm. And I do not want to have that awkward conversation in six months or a year when someone asks, “Whatever happened to that project you were working on?”

Show me. Don’t tell me about it. Unless you need help along the way, and then, all you have to do is ask.

How others are speaking less

Meanwhile, my life offline has turned life on this blog and participating in the Trust30 challenge on its head. So while I have been failing miserably at this post-every-day thing, I want to share with you a few responses to this prompt that I enjoyed and I hope you enjoy too.

What’s one project that you’ve been sitting on and thinking about but haven’t made progress on? – This blog.

What’s stopping you? – Honestly, time and brainpower. It’s amazing how much I’m starting to ‘write’ or map out blog posts on the bus and how different my life is now compared to last November when I was able to blog every single evening for 30-days straight.

What would happen if you actually went for it and did it? – I would rearrange my schedule and blog more so I wouldn’t be up until 2am every night trying to get it down.

How are you speaking less?