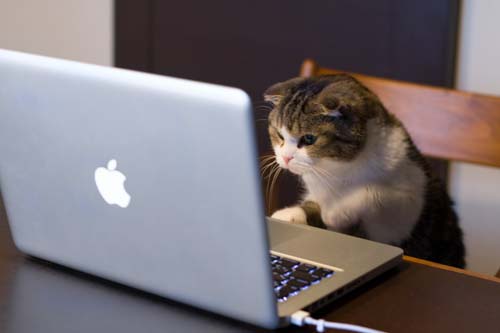 This is an adaptation of a talk I gave earlier this year at DistilledLive meetup on why and how to think “online first” in 2014. Focusing on what an integrated marketing campaign can do for your business, how social, community, and content development supports that, and how to optimize for whichever point in the customer lifecycle you’re focusing on this year.

During a media studies course in college, one of our assignments was to count all of the advertisements we encountered throughout the day for an entire week. This was back in early 2005 when it was easy—shut off the TV, limit Internet usage, walk through the park on the way to class to avoid advertisements on busses.

But this was before bringing a laptop to class was what you did and about a year before my school, Portland State University, got access to Facebook (and we wouldn’t believe you if you told us that one day, our Facebook would be overrun by business brand posts and advertisements).

I can only imagine how high that number would be if I had to count how many advertisements I encounter every day.

Today, Americans spend over 3 hours a day on social media and media consumption is expected to rise above 15.5 hours in 2015 (yikes!). And all those “stories” that we like, subscribe, and follow from brands? Those are advertisements, my friends, that we opt-in and agree to see.

Consumers are getting smart. We know when we’re being marketed to and, most often, we just want to be entertained. Looking towards 2014, here are 10 ways things to focus on to make sure that the stories you craft online for your brand this year are seen as stories and not ads that students will try ignoring for a class assignment.

If you do one thing this year, figure out what your corporate story is. Make it as simple as possible, and embed that story through everything that you do.

Create a human-interest story for your company. Remember that people are still self-centered and care about themselves, first, and how you fit into their lives, second. Tap into your customer’s first-person narrative and you will succeed this year.

For further reading, check out how BuzzFeed’s quizzes are taking the Internet by storm and why they’re so damn viral: The unstoppable rise of the BuzzFeed quiz.

Customers do not have to remember your domain name when they can Google it. So don’t sweat the domain name. Instead, invest time and money establishing your name and building equity in your brand online by creating a consistent image through every channel

Power out? No problem. pic.twitter.com/dnQ7pOgC

The big story around social media war rooms leading up to Super Bowl 46 was “How can we do an ‘Oreo’ this year?” When the real question should have been: should we? Can we? And does real-time marketing fit in with what we’re doing on other channels during the Super Bowl?

As a marketer, at some point in your life, executives or clients will ask you to make something “go viral.”

Before “going viral,” focus on what makes people like, share, comment, and click. Focus on what drives engagement, discovering and testing how much budget you need to make sure the right people see your stories, and if those results drive towards the results you need to make in your business.

One of the biggest stories out of the end of 2013 was about how Batkid saved the day in San Francisco. This one story represents how an entire city came together to help make Miles Scott’s wish to become Batkid come true, with the help of Make-A-Wish Foundation and the entire city of San Francisco.

Whenever possible, let photos tell your story, as most times photos are more succinct than even 140-characters.

To build on a few of the previous points, people know that brands are powered by people on social media, so find ways to pull the curtain back a little bit and show your audience what happens behind the scenes. You can do this through stories and photos.

This photo was taken of Macklemore getting the final haircut in his hotel room before the Grammy Awards where he and Ryan Lewis won four awards, album of the year, song of the year, and best music video, making Seattlites everywhere proud. The photo above was taken by Zoe Rain and posted on her personal Instagram account first, then later published in Rolling Stone Magazine.

Finally divorced @ATT. I hope @JohnLegere is going to console me over a beer next time he’s in NOLA #breakupletter pic.twitter.com/rRcRxJ8v68

Genuinely love them, in everything that you do. If you don’t, someone else will.

A number of brands have started integrating “customer love” into their marketing campaigns and the loudest is T-Mobile’s “un-carrier” campaign that started last year and the most recent evolution is asking customers to break up with their carrier and switch to T-Mobile. Campaigns like this gained T-Mobile 1.65 million customers in the last quarter of 2013.

There’s not such thing as limitless budgets anymore or blank checks without asking to show a return-on-investment (ROI). This goes for the corporate world all the way down to small business. So create strategies, develop plans, and design them so you can get the work done.

Your competitor will always do it first and your boss will always come up to you asking why you aren’t doing what they’re doing and why you didn’t think to do it first. These truths, unfortunately, still remain true.

Keep your competitors in sight, watch what they’re doing, and try and figure out why they’re doing it. Then, figure out how you’re going to do it differently and go for it.

You are nothing unless you build and execute. Simple as that. Pick one or two things from this list, focus on it, and rock and roll. Don’t get overwhelmed and stuck in planning and strategy mode. Get out there and do it.

Kate and I wrote our own talks on the same topic in isolation and traded slides only a few hours before we hit the stage. And the best part? Both of our presentations included similar tips, just told in different ways. Want to know for certain? Check out Kate’s presentation on going online first in 2014. And if you’d like this presentation in it’s full slide format, you can view it, download, and embed it below:

Thank you, Kate Morris of Distilled, for inviting me to speak and co-presenting with me!