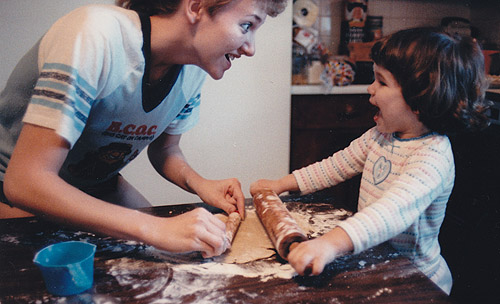 In every family, there’s one thing that is your “thing” and it’s a right-of-passage to learn how to do it and how to do it well. It’s usually a trade secret and something you can whip out at parties and impress your friends with. Something that is passed down by generations and a mad skill that is like nothing for you when you do it. In my family, this thing is making pies from scratch.

These pies originate where my roots do, from the Midwest. One year when I was in high school, my parents, sister and I spent Christmas with our family on their farm in Iowa. My grandpa wasn’t doing so well, so all the aunts and their families came to spend some quality time together. We turned my grandma’s kitchen into a pie-lover’s dream.

We are pie-making machines

We had three stations: crust, filling, fruit processing. The first few pies went straight into the oven and straight into our mouths. The rest were slid into gallon zip-lock bags and stacked in the deep freeze in the basement, to give Grandma something quick and easy to give Grandpa if he was being finicky. Since that winter, it’s been an unofficial contest between my cousins as to who can mass-produce the most number of pies in one pie-making session. One summer they made something obscene like 15 pies due to a healthy crop of homegrown rhubarb. I can’t compete with that.

But pies are not reserved for holidays alone. They come out whenever the fruit is fresh and guests are to be “wow-ed.” One fall my parents’ apple trees sprouted fruit for the first time in fifteen years. Homemade pies featuring homegrown, organic apples were in order. My friends ate well.  Another time John and I hosted dinner for new friends and I was supposed to make the famed apple pie except that I forgot. No worries, I whipped it out while John was making dinner. Ingredients to baking in 45-minutes flat—that’s one definite way to impress people.

There are three main pies in my family: Dutch apple, cherry, and pumpkin.

Apple is best when the fruit comes from homegrown apples, or anything grown in Washington. Once I was swayed to make a pie using bright green Granny Smiths, but I prefer Jonathans or a variety of Braeburn.

The best cherry pies come from fruit that’s purchased in bulk at the Amish store near my grandparent’s farm in Iowa. These cherries are tart and processed specifically for making pies. We used to carry them home to Seattle on the airplane, packed in coolers (this was during a time of less stringent airport security), and home to our deep freeze.

The best pumpkin pies come from the insides of Halloween pumpkins we were never allowed to carve. It wasn’t until I was in college and dating John that I carved my first pumpkin; mom wouldn’t let us waste the meat.

Piecrusts are a trade secret. Okay, not really. But they are made of four ingredients: flour, salt, Crisco, and water (though we always leave out the salt). What’s secret is how you mix and cut the dough.

One Thanksgiving I had a pie making party with a friend, we made a pie for my family and a pie for hers. When she brought hers home, her mom was impressed that we made everything including the crust from scratch. Apparently piecrusts are the hardest things to make. That was the first time I realized that what I know how to do—this pie making from scratch—is kind of a big deal.

I’m thankful to have grown up making pies with my mom so that as an adult, making pies from scratch is a “nonevent.” That’s the thing about having an inherited “thing”—it’s a part of who you are to the point that it’s not a big deal when you do it.

I’m thankful to have this skill, and I’m lucky that it’s a really tasty one too. I’d share the recipe with you, but it’s more impressive if you taste it for yourself.