How to Increase Traffic to Your Blog by Using Ryan Gosling 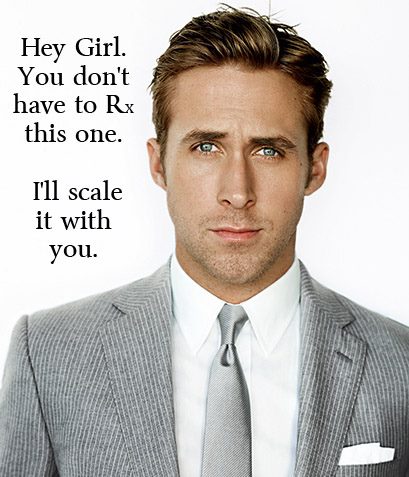 There was some pretty stellar content floating around the Internet last week, but perhaps the best thing I stumbled upon was CrossFit Ryan Gosling (full set on Facebook and on the co-creator’s blog).

“Hey Girl,” the meme, was originally started by Fuck Yeah! Ryan Gosling on tumblr, and made famous by Danielle Henderson’s Feminist Ryan Gosling. The blog was started as a joke to keep track of the theorists she is studying as she works towards her graduate degree in gender studies. The content has no affiliation to Ryan Gosling, the actor, and as with most things we encounter online, it doesn’t really matter because Henderson’s content is so damn entertaining.

Like all good memes, spin offs happen, and last week I ran into the most amazing rendition of the “Hey Girl” meme and that is CrossFit Ryan Gosling.

CrossFit Ryan Gosling was created (I believe) by Gabe Billings and Robin Runyan out of Eugene, Oregon and shared like mild wildfire on Facebook last week. You can view all 21 photos (so far) here.

Why CrossFit Ryan Gosling works: A Lesson in Marketing

The reason why Feminist Ryan Gosling worked so well and is (arguably) more famous than the original is because of a few reasons:

The fact that Ryan Gosling is featured is for entertainment only.

2) Find Your Niche and Stick to it

According to Know Your Meme, “Hey Girl” was created in December 2008 but made famous by Feminist Ryan Gosling when it came to the scene in the fall of 2011 and was featured on Ms. Magazine blog, The Huffington Post, GQ, Newsweek, Bust, and about a dozen more.

Granted, I haven’t spent much time on the original site, but the name is telling – “Fuck Yeah!” doesn’t really tell me what your site and your content is about, whereas Feminist and CrossFit does.

Takeaway: When given the opportunity, specialize and become an expert over being a generalist.

3) Do it Because You Want to

The best part about Fuck Yeah! Ryan Gosling, Feminist Ryan Gosling, and CrossFit Ryan Gosling are that they are all fans – of the topics they parody at least. If you want to create some great content that will have some “stickiness” to it, you have to enjoy what you’re doing and come from a place of curiosity or heart.

CrossFit Ryan Gosling was created because someone at the creator’s gym came up with the idea and the set is what they all came up with. The creators are CrossFitter themselves. They’re not getting paid and they probably did it because they wanted to. And that’s what it’s all about.

Takeaway: You will create something noteworthy if you love the topic you’re creating first.

In Other Sunday Serial News

When you’re done lusting over Ryan Gosling, here are a few other articles for you to read:

Post updated on April 22, 2012 to reflect multiple authors and the official web “home” of CrossFit Ryan Gosling to be here. Thanks, Gabe and Robin for stopping by!